Look who came to visit!!! He was wrapped up tight about the size of a four year old's fist when we found him, after three or four days of searching. He was watching us as he hid in the venetian blinds in the bathroom.

His approximately ten to twelve inch wingspan looked HUGE when he had been spotted flying around the bedroom ceiling as "the occupant" sat quietly reading in bed. We had looked carefully in the curtains, and corners of every room he might have had access to. We finally called in the expert: Dave Murphy, with Hoffman Pest Control, LLC. He gave us a clean bill of health, the house was tight, "Are you sure ('the occupant') wasn't mistaken?" he asked, moving systematically to places he had found similar visitors in other homes, until he spotted the tiny fist, with eyes in the venetian blinds.

Dave picked the little visitor up with the tool brought for that purpose, and deposited him carefully outside, near a tree –where he remained as late as midnight last night. 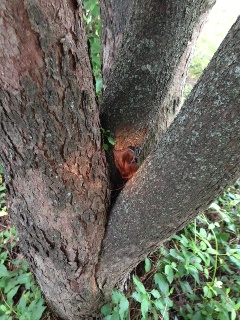 "Bats are protected by law, there are penalties if he is hurt," Dave said when I asked what he was going to do with the little creature. "I'm going to turn him loose outside."

The poor little creature was undoubtedly scared to be suddenly trapped, alone, inside the house. And I KNOW the person who saw him flying around was thinking of the stories of rabies, and really sharp teeth. But the law did not favor either of them standing their ground and if the other was hurt there would be penalties.
Posted by Peggy Hedrick on 8/17/2013 at 1:34pm